Today is Yom HaShoah, Holocaust Remembrance Day, when we commemorate the victims of the Nazi Holocaust (including members of my husband’s extended family).  And for the first time in several years, I have been reminded of my childhood meeting with Corrie ten Boom, the famous Dutch Christian who along with other members of her family saved many Dutch Jews from extermination.

During World War II, after the Nazi occuption of the Netherlands, the ten Boom family built a secret room in their home as a hiding place for Jews.  It was discovered during a Nazi raid, and the entire ten Boom family was arrested.  Corrie’s father died after only ten days in prison; two other family members were released; but Corrie and her sister Betsey ultimately were sent to the Ravensbruck concentration camp in Germany.  Betsey died at Ravensbruck, but Corrie lived and was released due to a clerical error ten months after her initial arrest.

I was only eleven or twelve years old when Corrie stayed at our home.  She was on a speaking tour and was scheduled to speak to an Atlanta women’s group of which my mother was a member.  Rather than put speakers up in hotels back then, groups would host speakers in private homes, and we were given the honor of hosting Corrie for two nights.  I knew of her fame and was awestruck that she was actually eating dinner with us and telling me the stories I already had read: how the Nazi guards somehow never found the Bible she hid in the hem of her dress and how the concentration camp guards would not come into the Ravensbruck barracks because of the fleas, leaving prisoners free to have spiritual discussions and prayer.

However, when Corrie (or Tante Corrie, Auntie Corrie, as she asked me to address her) pointed her finger at me across the dining room table and said, “Little girl, what I have done, you will do,” I was frightened beyond belief.  I remained frightened of that statement for many, many years.  Even now, I do not know what she meant.

Tante Corrie authored many books, including The Hiding Place which was made into a full-length feature film. Although I read several of her books, I was afraid to read The Hiding Place and afraid to watch the film.  Today, the movie can be viewed on Youtube. 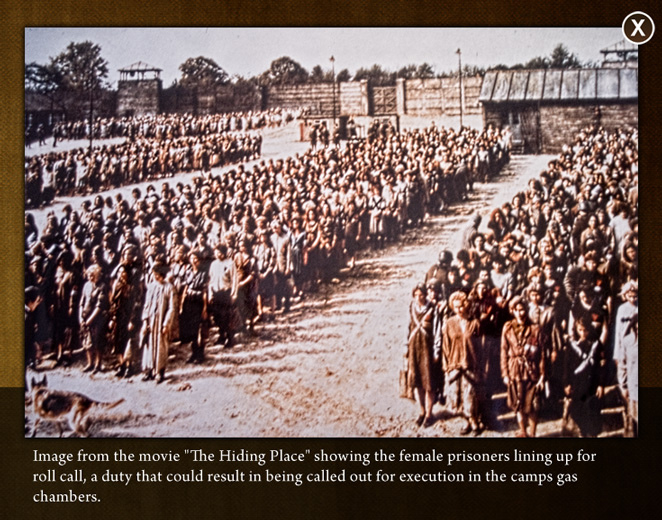 After World War II, Tante Corrie travelled to over 60 countries, telling of her experiences and preaching the message of forgiveness. That is how she came to speak in Atlanta in the 1960s and to stay at our home.  In 1967, she was recognized  by Yad Vashem, the Holocaust Martyrs’ and Heroes’ Remembrance Authority in Jerusalem as Righteous Among the Nations.  Eventually she settled in the United States and lived in California until her death in 1983.

Corrie ten Boom, I remember you…