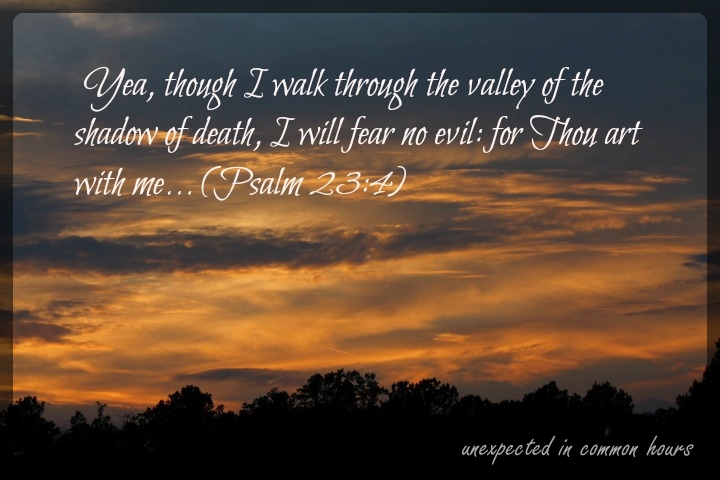 Although I didn’t get to the brink of death, I walked through the valley of the shadow of death and back out again during the past week.  It was a frightening medical emergency, but thank God, I am now on the mend.

A week ago today, I began feeling dizzy, weak, and nauseous.  Nonetheless I went to work at my nighttime teaching job and “prayed my way” through the evening.  The following day I felt much worse and could not even get up to walk to the bathroom without help from my husband. During the morning I began to vomit.  In the afternoon I began to vomit up dark blood, denying all the while that it was blood and telling myself it was the coffee or the Coca-Cola or the tea I had been drinking.  As evening came on, my heart rate accelerated, and I asked my husband to call 911.

To make a long story short, I vomited a large amount of blood in the presence of the emergency medical personnel who responded to the 911 call.  They transported me by ambulance to the hospital emergency room 30 miles away.  I was admitted in the wee hours of Saturday morning, and an endoscopy showed a large tear in my stomach which the doctor repaired by stapling it.  Much blood was pumped from my stomach during the procedure, and two days later it was necessary for me to receive a transfusion of two units of blood.  On Tuesday another endoscopy was done, and another staple was put in.  After spending a total of five nights in the hospital I was finally released yesterday.

I dealt with three different doctors during my ordeal, and not one could give a satisfactory explanation as to why there was a tear in my stomach.  Never have I been diagnosed with an ulcer, acid reflux, or any other gastric problem.  I did take the blood thinner Xarelto for three months due to a blood clot in my leg, and almost all the nurses who treated me blame that drug for the bleeding. They said that they see this often in people who have taken Xarelto.